More than three million animals live in the endless steppes of the Serengeti National Park, which is interrupted by rock formations and rivers. About 35 animal species, including the “Big Five” (Elephant, Rhino, Buffalo, Lion and Leopard) live in these golden plains of the Serengeti. Every year at the beginning of the rainy season two million wildebeest, zebras and two hundred thousand gazelles start their migration over the long endless dry and dusty paths. But a little rainy will magically transform the land into an endless green carpet with wildflowers.

The Ngorongoro Crater is surrounded by steep walls. This vast amphitheater measures about 20 km in diameter. He is an amazing phenomenon. “One cannot properly describe the crater,” wrote Dr. Grzimek, “because there is nothing like it.” In this garden of beauty which can be reached by four-wheel vehicles, hundreds of thousands of animals are at home: Elephants, Buffaloes, Wildebeests, Gazelles, Zebras and Rhinos. Monkeys and predators such as Cheetahs, Hyenas and Lions can be observed in their natural environment. Discover below our individual Safaris. 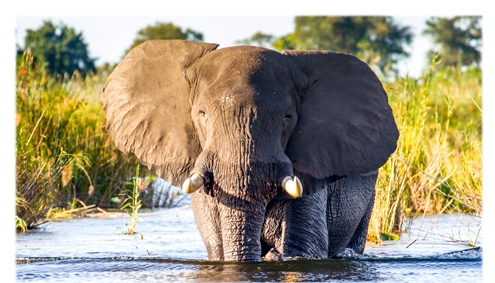 In addition to the Serengeti National Park there are the famous Ngorongoro Crater. Thanks to the conservationist Bernhard Grzimek we can enjoy the rich wildlife. In the Northern Circuit there are also Tarangire and Lake Manyara National Park, which can be visit during this Tanzania Classic. Tanzania is one of the last countries with an unimaginable animal wealth and big plains. By the way - in contrast to the fenced-in national parks in South Africa and Namibia, wild animals in Tanzania actually live in freedom and can migrate between the parks. 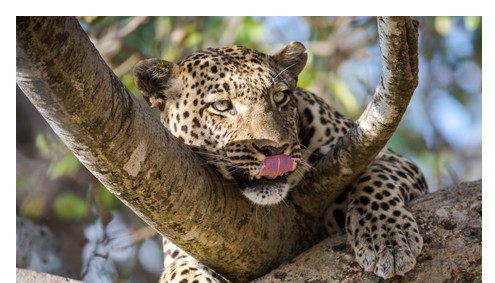 If you don't have much time but still want to see the most beautiful national parks in Tanzania, this variant offers Safari. You travel with private driver in a Land Cruiser. 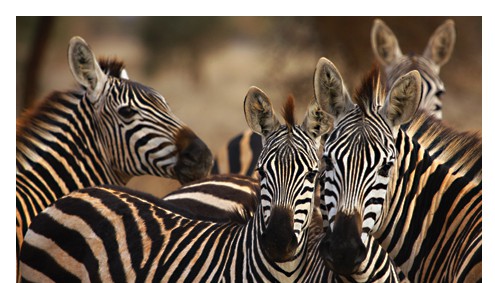 The three-day safari in two of the most spectacular national parks of Tanzania, Lake Manyara and Tarangire National Park offers a good chance to see the famous "Big Five": lion, rhino, elephant, buffalo and leopard. 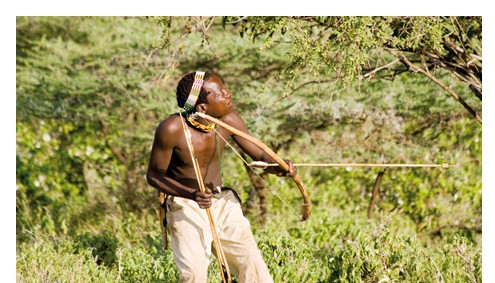 Learn interesting facts about the life of Hadzabe Bushmen and combine this with a safari in the Ngorongoro Crater. On Lake Eaysi live about 800 tribesmen Hadzabe. They succumbed plains game with bow and arrow. 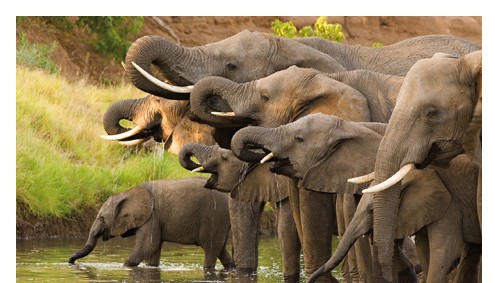 Once go on a safari and experience the African wildlife in the bush, is an achievable dream that we can meet from Afromaxx them. This Safari variant visit three of the most beautiful national parks in northern Tanzania. 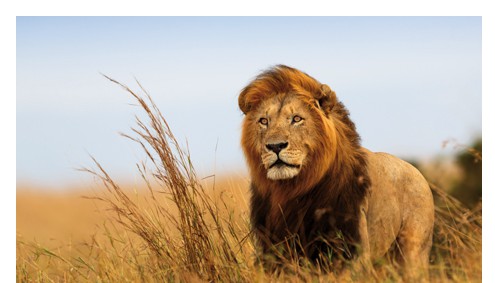 You can not decide? Which of the various National Park combinations is right for you? On this 8-day trip in comfortable Land Cruiser You will learn all the northern safari Tanzania National Parks. 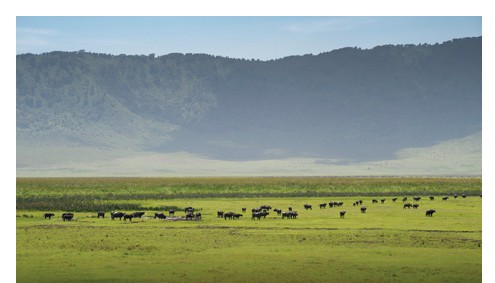 Surrounded by steep walls measures this huge Amphitheater about 20 km in diameter. He is an amazing phenomenon. In this garden of beauty which can be reached by four-wheel vehicles, to move hundreds of thousands of animals: elephants, buffaloes, wildebeests, gazelles, zebras and rhinos. Monkeys and predators such as cheetahs, hyenas and lions can be observed in their natural environment. 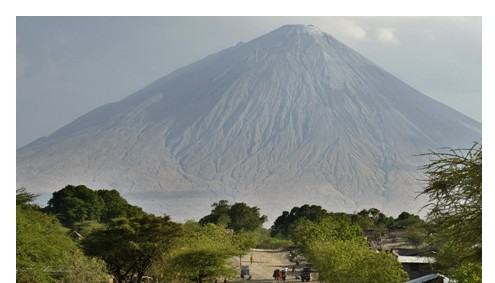 You like active travelling? You want to see elephants, lions, zebras and giraffes on safari? But you do not sit every day in the jeep? You would like to connect to your walking safaris and game drives varied with each other, experiencing an exciting lev river-migration and a walk on the crater? Then this tour is just the thing for you. 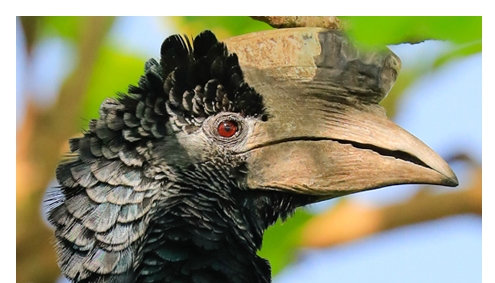 This combined Uganda-Tanzania trip leads to the highlights of both countries. You experience the gorillas and chimpanzees in Uganda up close, undertake a boat safari and hike with a ranger in Lake Mburo Park. In Tanzania you will visit the Serengeti with the largest number of lions in the world, the Ngorongoro Crater with the Big five and the Tarangire park with its huge herds of elephants. 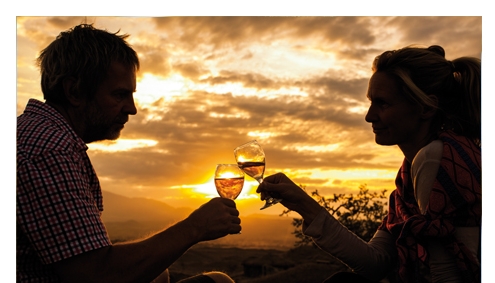 Tanzania is one of the most beautiful destinations for honeymooners with long lasting consequences – because the incomparable animal world is nowhere else to be found. Spend romantic days in exclusive lodges with a private driver during the safari and a flight to Serengeti National Park. 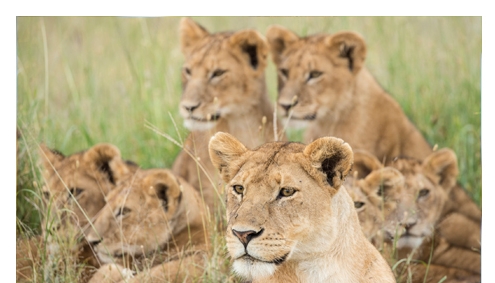 This varied tour through northern Tanzania offers you impressive wildlife. Visit the Serengeti National Park and the Ngorongoro Crater, enjoy cultural encounters with the Masai at eye level, experience highlights away from the tourist magnets at Lake Victoria and various activities at the crater lake Lake Chala. 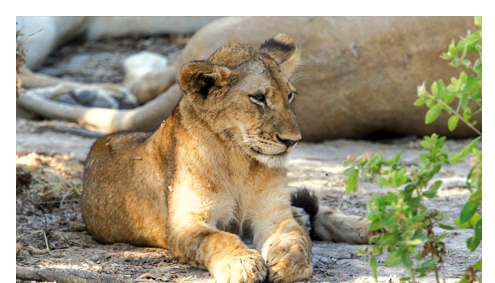 This Journey is like a fever! It is rich in activities, rich in wildlife viewing and rich in the diversity of national parks. With a domestic flight you arrive at Great Ruaha - the largest national parks of Tanzania. Together with your driver you discover the "Big Five", the Udzungwa Mountains National Park, Mikumi National Park and Selous. 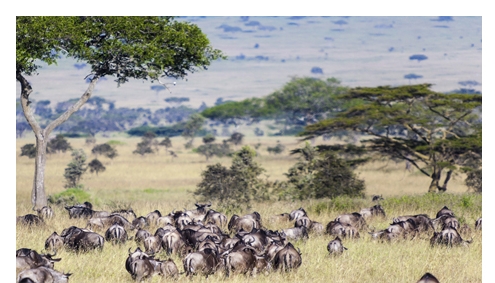 During the month of August, September and October the animals of the Great Migration are in the north of Serengeti National Park. The zebras and wildebeests are crowded along the Mara River. They want to move to the other side of the riverbank. But nervously the animals jump back with every little noise. A lion could jump out of the bushes or an urge crocodile could grab them from the muddy river. But the departure is a must. In Mara Area dryness will take over in a few weeks, while in the Serengeti fresh grass secures the future of the herd. Followed by the instinct the animals plunge into the unpredictable rapids and make their way. 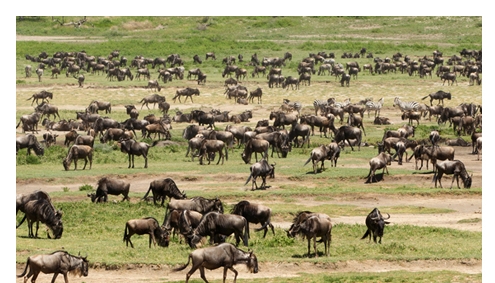 Ndutu is the place where the animals of the Great Migration are born. Every year they take a break and give birth to thousands of zebra foals and gnu calves. The Ndutu area is known for its short grass plains, where extremely nutritious grass grows. The grasses are particularly well nourished, and it provides little cover for predators to sneak in unrecognized. 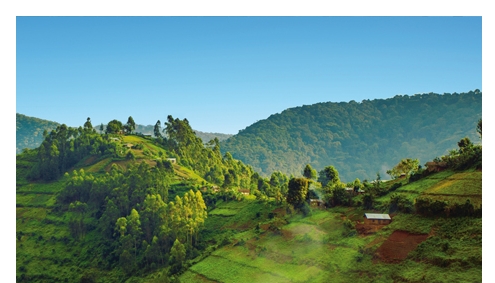 Africa is exciting, diverse and adventurous. East Africa plays a very special role. With mountains, rivers and national parks, it offers very concentrated TOP tourist attractions. On this Great Triangle Tour we will take you to the most popular destinations, above all the Virunga Mountains, the Bwindi Impenetrable and the Serengeti. Experience unforgettable gorilla tracking and Serengeti migration in one trip. 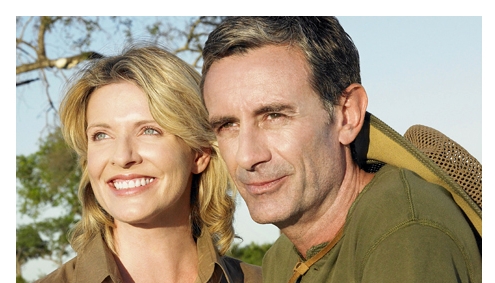 The Maasai Mara is one of the most popular national parks in East Africa. Lions, elephants, zebras and many other animal species live in the area north of the Serengeti National Park. On this East Africa trip we cross the border between Kenya and Tanzania and have both national parks in our program. A guarantee for spectacular experiences with exciting game drives. In the neighbourhood, in the west of Uganda live the mountain gorillas. Even if they do not belong to the Big Five, the gorilla family with the silverback will undoubtedly impress you.

As soon as you enter the Manyara National Park you are amazed by the dense vegetation and the number of ancient trees, which create a home for plenty of birds and different kind of monkeys. Further into the park the forest turns lighter and transitions into grassy plains and swamps to the Manyara Salt Lake. There you will be thrilled by the Flamingos, Pelicans and Storks. Near the shore Zebras, Buffalos and Giraffes are eating the fresh grass. The southern end of the Lake Manyara National Park features hot Sulphur baths by the name of “Maji Moto”. The best-known animals of the park are the tree climbing Lions, which spend the majority of their time stretched out on the branches of Acacia Trees. The Lake Manyara National Park is also home to larger Elephants herds, Antelopes and Hippos.

The Serengeti is the most known National Park in the world. Within its borders more than 3 million animals are living. The size of the untouched Serengeti Land is incredibly large and varied from the endless pains over rocky copies to savanna land with Acacia trees. In the heart of the golden plain’s animals including the “Big Five” (Elephants, Ehinos, Buffaloes, Lions and Leopards) are at home. And every year about 2 Million Wildebeest and 200.000 Zebras start to migrate. Always with the aim to find new shoots of the short grass. Eland and Thomson’s gazelle also migrate but are not following the 2000 km long main migration. Mostly they just alternate between the plains and the woodlands. Lions, Leopards, Cheetah, Hyena and other smaller predators are moving in a smaller distance and crocodiles wait for their big turn when the Serengeti Migration crosses the river.

Surrounded by steep walls, the Ngorongoro Crater is like a giant amphitheater with an diameter of about 20 kilometers. It is a breathtaking phenomenon. “You cannot describe the crater,” said Dr. Grzimek, “because there is nothing to compare it to.” In this garden of Eden of Ngorongoro Crater, which can be accessed with 4×4 vehicles, you will encounter hundreds of thousands of animals like: Elephants, Buffaloes, wildebeest, Gazelles, Zebras and Rhinos. Monkeys and predators like Cheetahs, Hyenas and Lions are seen easily in their natural habitat. Also, there are more than 150 bird species, which cannot be found in the Serengeti.

The year-round water carrying Tarangire River is the lifeline of the 2600 km² large national park. The hilly savannah landscape with its umbrella Acacia Trees and Baobabs close to the park entrance changes into enormous grass plains towards the south. In the dry Saison the southern swamps turn into a green paradise with fresh grass for numerous species of animals. Tarangire National Park is known for its richness in species and huge Elephant population. About 550 different types of birds are living in the Tarangire National Park. There is no other place in the world that is a nesting place for this many species. The Tarangire National Park is the preferred home of Zebra, Wildebeest and Ostrich. Also, Impala Antelopes, Warthogs and Giraffes are seen often.

This is the second smallest national park in Tanzania with a size of 137 km². But its diverse landscape cannot be beaten. A favorite place to visit during a Tanzania Safari to enjoy it opulent swamps at the Ngurdoto Crater and the grazing herds of buffalo and the Momella Lakes with their high salt content that causes, depending on its varying consistency, colorful glows from turquoise to moss green. In addition, the majestic height of Mount Meru dominates in the west. The Socialist Peak is with 4500 meters altitude is the highest point in Arusha National Park and a desired destination for mountain climbers. The ascent takes you through forests filled with blooming plants, moss covered treetops and ferns which create an unforgettable image.