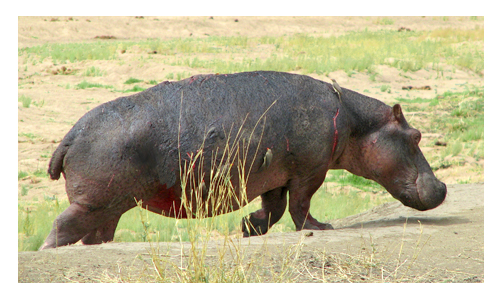 Ruaha National Park is the biggest park in East Africa

Ruaha National Park it the largest national park in Tanzania and East Africa. In additional the Usangu Game Reserve and other important wetlands the protected area is 20,226 square kilometres (7,809 sq mi). In the year 1964 the park was granted full national park status. Among the African connoisseurs, Ruaha National Park often takes on an extraordinary status, because here are both the plants, as well as the animals of southern and eastern Africa to find.

The name of the park is derived from the Great Ruaha River, which flows along its south eastern margin and give perfect spots for game viewing. The river flowes across the base of the Rift Valley at an altitude of almost 900 m. That Great Ruaha River creates an extra ordinary beauty. While the waters turns wild during the torrential rains the Ruaha River flows calming down into tranquil pool. Where there is water there is life and the fine network of game viewing trails.

The landscapes range from dense forests and baobab plains to hills and open savannahs to river landscapes. So they are as varied as the wildlife in the park. Black and white antelopes, gazelles and Impala, Waterbuck and Kudu, Zebras and huge Buffalo herds. But also large numbers of Hippos and Nile Crocodiles are seen during the Safari Game drive. The Ruaha Park is also the place to spot large packs of lions, as well as Leopards, Cheetahs, the endangered and rare wild dogs. Even the shy striped hyenas can be found. Imagen – Ruaha National Park offers some of the best opportunities to see African wildlife.

The home of Greater Kudu and beautiful River

Kudu, a very unique and beautiful animals, they belongs to the group of antelopes. During your Safari to Ruaha National Park you can find a herds of Greater Kudu and Lesser Kudu. The Greater Kudu is bigger and seen more often than the Lesser Kudu. When greater Kudu eats the seeds of the vegetation, new plants are allowed to grow and create pathways for other animals. They are also one of the major ways in which trees disperse their seeds. Some species depend completely upon Kudu for seed dispersal. Particularly note worthy is the high population of elephants and big cats.

The park had different types of habitants within its boundaries tree and scrubs characterized by semi-arid type of vegetation, baobab trees, Acacia and other species. There are over 1,650 plant species that have been identified. The savannah, miombo savannah and wetlands the savifauna is remarkably rich. With over 500 species of birds, even a short morning walk will be extremely rewarding. Apart from large animals, the park also harbours a number of reptiles and amphibians such as crocodiles, poisonous and non-poisonous snakes, monitor lizards, agama lizards and frogs.

How to get to Ruaha?

Since the Ruaha is relatively secluded, there are only about half a dozen smaller accommodations on site. The best way to reach the park by small plane, but also multi day driving safaris from Dar es Salaam or Kilimanjaro can be arranged. Especially recommended for animal watching is the dry season from July to October. Also there is a wide selection of accommodation in or near the Ruaha National Park. There are also permanent or seasonal tented camps inside the park. A Safari place you wont regreat!