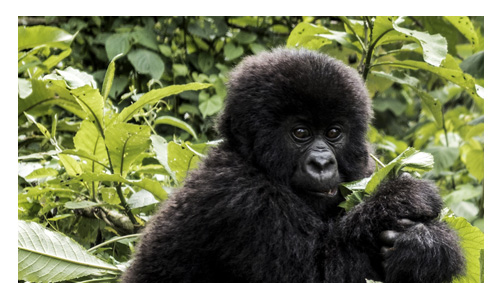 There are quite a few facts about these Mountain Gorillas that we are unaware about until we look for them. Did you know that Mountain gorillas are considered critically endangered by The International Union for Conservation of Nature’s Red List? There are only about 880 Mountain Gorillas remaining in world. All of them live in the wild and are only found on the African Continent.

Bwindi Impenetrable National Park is a UNESCO World Heritage Site. Did you know that gorillas share 98% of their DNA with humans? Aged male gorillas are called silverbacks. This name originates from the silver stripe they develop on their backs when they mature. The silver hair can be compared to the grey hair that humans develop.

Bwindi is home to about 340 mountain gorillas which roughly is half of the world’s remaining gorilla population. So, basically Bwindi is one of the only three places in the world where one can witness Mountain Gorillas in their natural habitat.

The night before the Gorilla Tracking, the feeling of actually being in the same area as these magnificent animals is awe-inspiring, its’ almost hard to believe. Since I was a child, I was fascinated by Gorillas and this was my big dream coming to life in a few hours. I would see them and be able to be in close proximity of them. I was so excited that night before the climb I could hardly get any sleep, but in the end it was all worth it.

The climb started at about 8am, so I was expected to have a heavy breakfast and be ready by 7am for the pick up to go to the gate where the track starts. My adrenaline was pumping, I had heard a lot about the climb and how challenging it is, I didn’t pay much attention to those comments, but little did I know, I would be experiencing it very soon. Getting to the gate, we met our ranger guide who briefed us about being vigilant in our surroundings, never to walk or wander off alone, NEVER beat your chest in front of a Mountain Gorilla as they may see it as an invitation for a face-off and at all times have at least a 7 meter gap from the gorillas.

After all this briefing we started tracking for Gorillas at 8:30 am, the unique thing about Bwindi is that, when registering for the permit for gorilla tracking, climbers are assigned to a gorilla family in advance, thus the day of the climb you have to track to that particular gorilla family you are pre-assigned to.

Group we tracked is called BWEZA GORILLA GROUP. Bweza Gorilla Family is one of Nshongi Group that used to be the largest ever habituated in Bwindi Impenetrable National Park.  However, one Silverback decided to leave the group and start his own family, he left with reasonable number of them including the Silverback Bweza. After sometime, Bweza chose to be independent; he walked away with about 6 other members and formed BWEZA Gorilla Group.

How the Gorilla Tracking works

The ranger-guide along with porters (I would highly recommend having one), started to lead us into this dense forest, as we walked he explained the various types of flora around. We walked full of energy for about 2 hours until the trail came to a dead-end. I thought, oh boy… we’re not going to get to see them, the ranger-guide then told us that, the rangers who have been tracking the Bweza group, have not informed them of where the gorilla family was as it was in motion. We waited and got refreshed at this dead end, waiting for any news from the trackers.

Once there was a response, ( I didn’t see this coming ), the ranger took out a machete, and started cutting plants on our way uphill, no trails at all, we were making out own trail. Those rangers are so fit, because the incline of some places was up to 60 degrees. It was challenging, and exhausting, but we knew that we will get to see these beautiful Gorillas very, very soon. We climbed and climbed for what felt like ages but in reality it was about 1 hour only.

Voila! We finally heard something at a distance. I was breathless, because my dream was about to come true!! We walked a little bit further and wow; there they were, 3:30 hours of walking and exhaustion all disappeared in an instant. We all took pictures galore; there was baby gorilla which was the highlight of the trip for me. There was a massive silverback, they’re so huge but yet so shy, gentle giants they truly are.

One hour with the Mountain Gorillas

After the 1 hour we got to spend with the Gorilla Family, I was in eternal bliss.. I was spellbound, no words can ever explain what I felt in that one hour, it was magical. The real exhaustion hit us when we started our trek downwards the hill, I now understand why it is called Impenetrable, the forest is so thick and dense. We walked and walked and finally made it to the gate where we began. The fatigue was real, but hey, my childhood dream just came true so it was all worth it. Once we completed the gorilla tracking, we got certificates congratulating us on having gorilla trekked.

For me, that certificate is a proof that dreams do come true. I penetrated the Bwindi Impenetrable National Park, will you? Here you can find our Uganda Tours.