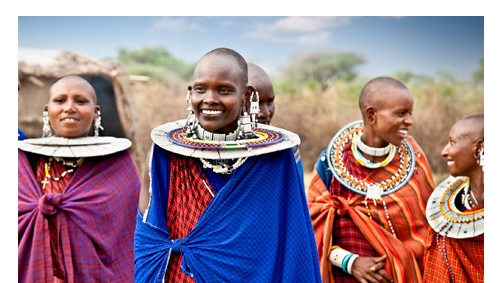 The origin of Maasai people moved from Sudan, inhabit the African Great Lakes region and in Kenya and Tanzania. They began migrating to the south in the 15th century, arriving to what is now central Tanzania between the 17th and late 18th century. Today Maasai are very wide spread in Serengeti National Park, Tarangire National Park, Ngorongoro Conservation Area and between Mount Meru and Mount Kilimanjaro.

The Maasai people are very famous

in the world for the unique lifestyle and their attractive colorful shuka. Every Maasai does not wear the exact same clothes, but there are a few common personalities. Most Maasai wear the color red because it symbolizes their culture and they believe it scares wild animals away. Also, most of the men wear a shuka.  The women wear clothes that are most beauty colorful and decorated with beads.  The women also wear capes. Men, women and children all wear their hair in different ways.  Women and children keep their hair very short.  Warriors wear their hair in braids that are dyed red and are most beautiful. The Maasai are famous for their beaded jewelry. The men wear beaded bands on their wrists, ankles, waists and necks.  The women wear big, beaded collars.  Each color of bead represents something, red means bravery and strength, blue represents the color of the sky and rain, white shows the color of a cow’s milk, green symbolizes plants, orange and yellow mean hospitality and black shows the hardships of the people.

Maasai believe all cattle’s belong them

The Maasai are interested in raising cattle that help them get meat and milk for eating and drinking too and blood from cattle for protein and caloric needs. The community that lives with wild animals like domestic animals. They do not kill lions to eat their meat. But they might kill them to secure the cattle’s. The communities of the Maasai are impressive because they live in co-operation and work together even through long distance.

The Maasai are living in differed age groups. Girls’ need to cook food, prepare milk and collect fire wood. They are taught by their mothers very early. A 15 year old boys belongs to the newest generation and called Morans.  It i also the age they are circumcision ceremony.  Circumcision is performed on both sexes, with the elder men circumcising the young boys who are not permitted to make a noise during the ceremony and the elder women circumcising the young girls for whom crying is permitted. Traditionally the Maasai live in extended families in Tanzania. The men are responsible for security, fencing their homes with acacia thorns to keep marauding lions away from their cattle’s.

The boys act as herdsmen while women and girls build houses, collect wood and water and prepare food. These days, some families often live independently. The girls are as motivated as the boys, keen to learn trades and develop skills as cooks, housekeepers, artists and even as African Mecca game guides and camp managers around East Africa. Maasai are pastoralist and have resisted the arguments of the Tanzanian Government. Till now the Maasai have a unique status and do not abbey all laws. The Maasai demanded grazing rights near many National Parks. Especially in dry season the conflict between wildlife and cattle’s about the green grass is getting bigger and bigger. It is no secret that the Maasai are on one hand an admiring tribe and on the other hand a source of some conflicts wildlife and land which will need to be handled at one point.