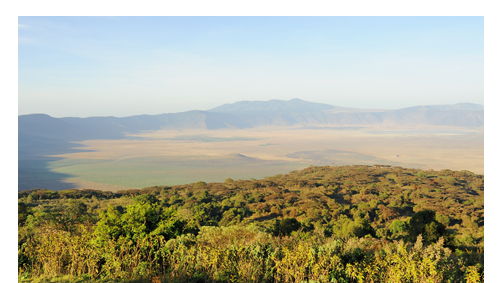 Ngorongoro is the worlds’ biggest caldera. What is a Caldera? It is a large volcanic crater, typically one formed by a major eruption leading to the collapse of the mouth of the volcano. Ngorongoro crater was named a world heritage site since 1979. The mountain that erupted that resulted in the formation of the Ngorongoro Crater was known to be as high as Mt. Kilimanjaro, the highest mountain in Africa.

What makes this caldera different is that there are a great number of animals that reside in this crater. This crater has its own eco-system which is home to than 30,000 animals, including the big 5 (Rhino, Elephant, Buffalo, Leopard, and Lion).

Eden of Africa of Tanzania

When the journey to this amazing destination begins, people have a lot of expectations due to the fact that it’s one of the most visited places in Tanzania. In addition, it is also known as the “Eden of Africa”, such a title comes with high anticipations. But having been there, more than once shows how alluring its beauty is. Once at the main gate, having seen numerous pictures of the crater, you begin to imagine what the sight of this crater would be like in person. The weather from the gate begins to change, due to the greenery, there is more fresh air and since the gate is outside the crater and on its rim, it’s on a high altitude, so cold winds are surely going to be sensed by the visitors.

The first feelings that one person has when they view the crater for the first time in their lives from the view point is one that is difficult to describe. The closest words people use to describe it are: mesmerizing, breath-taking, fascinating, captivating and many other words. Again, there are those that are left speechless and have no way of describing what is in front of their eyes. The air, the view, so different from the usual city life, so refreshing, is just an out of the world experience. The crater cannot fit in a single picture (even if taken as a portrait or landscape), the only way to get the picture of the whole Ngorongoro crater is taking the picture on a panorama mode. Once you get enough of this spectacular view, the game drive begins. You are taken to a place where the vehicle will start its’ descend into the crater. The crater is 2000ft /610m deep, you get to experience the dirt road and sense the crater floor getting closer and closer to you as you descend.

Safari – the world of animals

The animals that one can hope to see in the crater with a width of roughly 22kms include: Lions, Rhinos, Elephants, Antelopes, Zebras, Wildebeests, Antelopes, Hyenas, Buffalos, Hippos, Gazelles, Elands and many more. Cheetahs and Leopards are rarer to see but nonetheless do live in the crater, Ngorongoro crater also offers a variety of flora and fauna and bird life i.e.; Eagles, flamingos etc.
Lake Magadi (Magadi means Salt in Swahili), a shallow soda lake ringed by extinct volcanoes, is renowned as a habitat for great flocks of pink flamingos.

No other caldera in the world offers what Ngorongoro crater offers. Besides being called Garden of Eden, it is also included in one of the Seven Wonders of Africa. No words would describe how this experience would feel, but only if felt by yourself.